Function, Duties and Responsibilities of Initial Board Members

The following description of the function, duties and responsibilities of the Initial Members of this Board is somewhat contingent upon the litigation environment in which this Board may be required to function. This outline is set forth in part for those who may be interested in serving so that they get a sense of the duties, responsibilities and time commitment that may be involved in serving on this Initial Board.

Function: (In the event we have the opportunity to repopulate the SSSC Board)*
(*Note: if a separate non-profit is formed to work with the Receiver, the nature and scope of the duties of this Initial Board is at this time unknown and therefore has not been enumerated in this letter.)

Mandatory Eligibility Requirements
In order to serve on this Initial Board, a person must meet the three following mandatory eligibility requirements:

(Note: If you are uncertain if you are a Minister in good standing, to get a current Minister Card or to complete your renewal for 2012 – 2013, you may contact Ek Ong Kar Kaur in Los Angeles at: [email protected])
Mandatory Exclusions:
​A person who is subject to any one of the below referenced exclusions shall NOT be eligible to serve on the Initial Board.

There are approximately 160 Ministers of Sikh Dharma International who are eligible to serve on the Initial Board.

Excluded from voting are individuals who meet the “Mandatory exclusions” identified above.

There were 510 members of our Sangat who were issued voting credentials and 357 ballots submitted.
​
The Initial Board consists of the following 15 members, in addition to the Siri Sikdar Sahiba and the Bhai Sahiba:

If any of these members are unable to serve, the next ranked candidate will replace them on the Initial Board.
The complete results of the election are as follows: 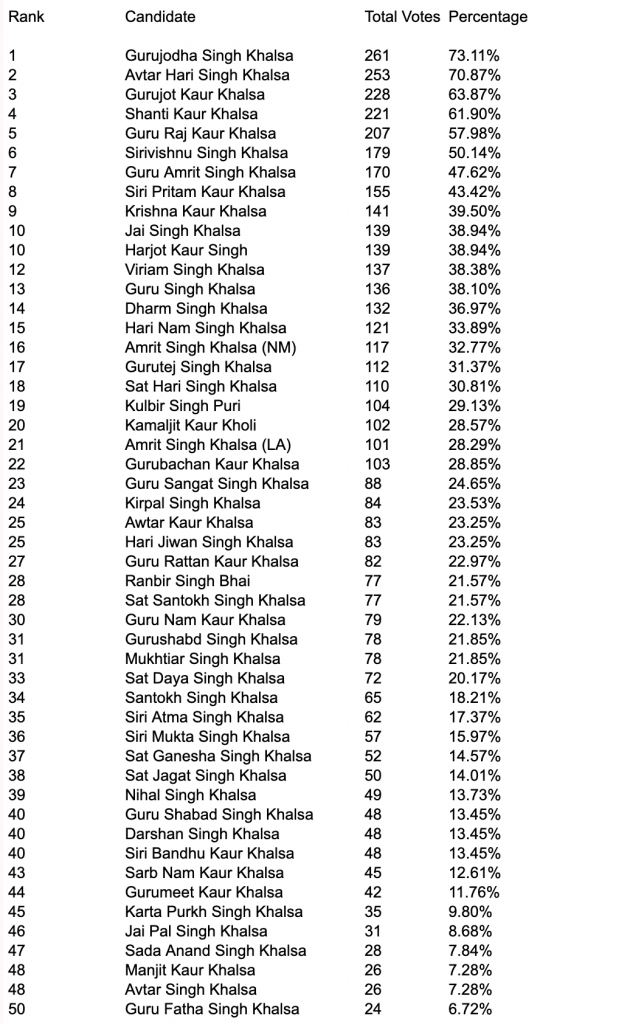 Based on Judge Roberts’ draft ruling in April, this Initial Board will only have the legal right to work with the Receiver in managing Golden Temple/Yogi Tea, as that is the only asset that is out of control of the UI Board and placed in the hands of the Receiver.  This is an important responsibility, as the tea business is a major source of funding for Miri Piri Academy (SDEI), 3HO, KRI, SDI and Sikhnet.